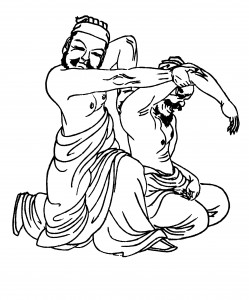 It is estimated by literature that the roots of acupressure in Japan can be traced back to tui na, which was introduced from China around 1,200 years ago. Tui Na is an ancient Chinese therapy, and as far back as the Spring and Autumn period and the Warring States period, over two thousand years ago, massage therapy was widely used in medical practice.
At that time, a folk doctor, Piao Chiao, used massage and acupuncture to help his patients.

Oldest extant medical texts in China
The oldest surviving Chinese medical text, the Neijing of the Qin-Han period, records massage as a treatment for paralysis, impotence, mouth and eye diseases, and stomach pain.

Massage is recorded in the Qin-Han period’s Neijing as a treatment for paralysis, impotence, sloping mouth and eyes, stomach pain, etc., and related massage tools such as acupuncture needles without pricking are described among the ‘Nine Needles’.

During the Sui and Tang dynasties, Chinese medicine was introduced to Korea, Japan and India.

The Japanese adopted, changed and developed many things from Chinese culture. The same is true of anma and acupuncture, which developed into ‘shiatsu’.

Shiatsu, in Chinese characters, is the application of pressure with the belly of the finger. It uses the body’s natural body weight to apply pressure to pressure points on the body. This pressure affects the energy that flows through the meridians. This energy is called ‘chi’.

Qi itself is invisible, but its function can be confirmed by sensations (warm, cold, fluid) in the body. It is through the action of one’s own chi that wounds heal ‘on their own’. Traditionally, everything has been regarded as an expression of chi. The chi is the starting point and the force for life. When chi is stagnant, the body becomes ill.